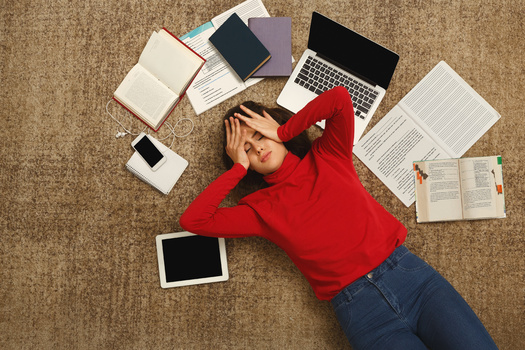 Despite challenges, students who quit want to come back / Public News Service

In the wake of the pandemic disruptions, research shows the majority of students in North Dakota and beyond who have left school in the past two years want to return despite continued obstacles.

The report of Gallup and Lumina Foundation surveyed over 11,000 current students, others who recently “quit” and prospective students. He revealed that difficult classes were a big factor for those leaving school in 2021.

For traditional-aged students, said Stephanie Marken, Gallup’s executive director for education research, the stress of being isolated during their later high school years made them less prepared for a college setting.

“So we’re seeing high levels of course difficulty for students who report having considered quitting for this reason,” she said. “A lot of students who traditionally wouldn’t struggle to persevere, even in a first-year program, are really struggling to do so. So we’re also seeing a huge need for academic support.”

Just before the pandemic, the North Dakota University System released the findings of a student well-being survey. Nearly 40% reported feeling down or depressed on several days over a two-week period. Another 24% said these experiences made it difficult to complete their academic work.

The report also found that for those who stayed in school, their belief in the benefits of receiving a degree is a big part of why they stayed. Courtney Brown, Lumina Foundation’s vice president for impact and planning, said current and prospective students are seeing how this achievement can help them increase their knowledge and pay off.

“High percentages said they knew they needed a degree or certificate to learn skills, to get a job,” she said, “so the survey actually shows that there is great value in higher education. And that’s even for people who have never been in higher education.”

The report found that multiracial bachelor’s and associate’s degree students were the groups most likely to say it was hard to stay in school over the past year. Many have cited the high cost of college and the need for financial assistance to complete their education.

Support for this report was provided by Lumina Foundation.

The New Hampshire Senate is holding a floor vote today on an invoice they call the “Bill of Parental Rights,” but which LGBTQ+ youth advocates say violates student privacy and is said to harm student mental health.

Among other measures, it requires schools to notify a student’s parents if they participate in school clubs, extracurricular activities or visit the school counselor.

Chris Erchull, staff attorney at GLAD-GLBTQ Legal Advocates and Defenders, said the provisions would be harmful to LGBTQ+ students and undermine the school’s efforts to create an affirmative and inclusive learning environment.

“LGBTQ youth have the right to go to school and express themselves as those they include in their gender exploration, and they should also have the right to associate freely with their peers and with teachers. who they trust,” Erchull said. “This legislation really interferes with those rights.”

Proponents of the bill argued that it would promote parental involvement in education, but Erchull countered that the United States faces a mental health crisisthat disproportionately affects LGBTQ+ students, and young people need to be able to connect with trusted adults at school.

Linds Jakows, a Dover-based advocate, echoed that LGBTQ+ students need safe spaces such as clubs at school or the ability to discuss their identity with a counselor without judgement, and the law could deprive students of these protections, especially those whose parents may not accept who they are.

“When I was a student, I gradually started coming out as queer to a few trusted friends and my favorite teacher,” Jakows said. “If there had been a parental rights law on the books at that time, my dad would absolutely have gone so far as to show up at a Gay-Straight Alliance school meeting to stop me from going there. to go.”

The bill was passed by the House and out of Senate committees ahead of today’s floor vote. If senators vote to pass it, the groups will look to Governor Chris Sununu for a veto.

As Pennsylvania’s student population becomes more diverse, there is a growing gap between the proportions of students of color and teachers of color, according to new data.

Last year, 48% of all schools in Pennsylvania employed no teachers of color. Even in cities like Philadelphia, where more than half of teachers of color work, there are 1,200 fewer black teachers than 20 years ago, according to research data for action.

Further study of the reasons for this trend is needed, but David Lapp, Research for action director of policy research, said it should be a wake-up call for education officials and policymakers.

He said Research For Action is conducting a study of black teachers in Philadelphia to better understand what can push them out of the classroom. Pennsylvania offered “Aspiring to Educate,” a teacher diversity pilot program for high school and college students, in 2020.

The new data was released as part of an inaugural “learning” recently held at FDR Park in Philadelphia. The event brought together community members, academics, school leaders and students to discuss systemic barriers to education jobs.

Saxon Nelson, director of community engagement for Research For Action, said the benefits of having teachers of color in the classroom go beyond racial representation.

“People have talked a lot about having students of color represented right in front of the classroom and how that opens up windows and doors for them, from reflection to opportunity,” he said. “But I think it’s a big eye-opener to really sit down and understand that white students in the class are also impacted on the positive.”

Nelson said his group plans to hold another seminar next year. He added that some strategies that could bolster teacher diversity in the state include a focus on retention and lowering the grade point average requirement for teacher preparation programs.

Educators and union leaders are voicing concerns about a bill in the Missouri Legislature. He is called the “Parents’ Bill of Rights” but critics say parents already have their rights within the public school system, and warn that such measures could only serve to overwhelm educators.

The bill would require written permission from parents for children to attend school assemblies, field trips and other extracurricular activities, and allow them to object to school materials based on their beliefs.

Jason Roberts, President of the Kansas City Federation of Teachers and School Staffsaid he thought the bill would be a setback for student education.

“I, as a former history teacher, would not be able to speak about the creation and implementation of slavery in the United States,” he said. “Well, history tells us that is true – however, I have no right to teach that.”

The bill outlines a set of rules and allows the state to withhold funds if they are not followed. It would also allow parents or the attorney general to sue school districts. It was passed by the Missouri House and advanced out of the Senate Education Committee.

Roberts said he sees the bill as a solution in search of a problem. He said parents already have the opportunity to be heavily involved in their child’s education.

Roberts Saod Parental involvement in education can be a powerful tool that supports both teachers and students.

“Parental involvement is a blessing at all levels,” he said. “I think parents are the most important aspect you can have in a good quality education. But this bill doesn’t actually give parents anything they don’t already have.”