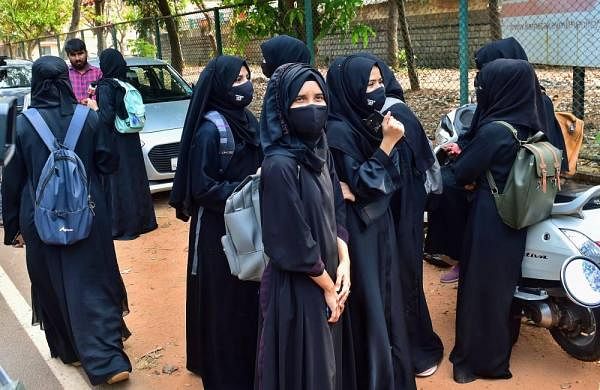 BENGALURU: The hijab dispute persists in only eight high schools and junior colleges out of a total of 75,000, the Karnataka government said on Thursday, expressing confidence that the issue will be resolved.

The High Court, in its interim order pending consideration of all hijab row related petitions, last week banned all pupils from wearing saffron shawls, scarves, the hijab and any religious flag in the classroom.

However, the controversy refuses to die down as some students remained adamant about being allowed to take classes with ‘Hijab’ and ‘Burqa’ on Thursday as well.

Karnataka’s Minister of Primary and Secondary Education, BC Nagesh, told media here that the “problem” is confined to a handful of secondary schools and junior colleges.

“Out of 75,000 schools and colleges, the problem persists in eight colleges. We will resolve this. We are happy that all students followed our order,” he said.

Tension reigned at Sarala Devi College in Ballari as parents and students staged a sit-in outside the facility after burqa-wearing students were barred from entering, authorities citing a court order.

After being persuaded by the police and lawyers, the protesters dispersed. At the Vijay Institute of Paramedic Sciences in Belagavi, the unrest has led to tensions. Six people who had raised the slogan “Allahu Akbar” in front of the college were arrested.

According to police, many people who were not associated with the college took part in the protest. After identifying them, the police arrested them.

At Chitradurga Women’s PU College, female students staged a protest outside the college. A student complained that he was not allowed to enter his “own college”.

“Are we not students of this college? We have been coming here for five years. The court only issued a temporary order (restricting the use of hijab and saffron scarves). Our only request is that we take off the burqa but we will wear the hijab. If we are not allowed in, we sit outside every day,” the student said.

Another student said they were supposed to take the preparatory exams but due to the ban they were forced to sit in the hot sun.

In Chikkamagaluru, students held a rally and questioned why Hindus were allowed to use their “bindi and bangles religious symbol” if there were any restrictions.

On January 1, six female college students from Udupi attended a press conference organized by Campus Front of India (CFI) in the coastal city to protest against college authorities for refusing them entry to class by wearing the hijab.

This was four days after they asked the principal to grant permission to wear the hijab in class, which was refused.

Until then, students wore hijabs on campus and entered the classroom after removing headscarves, college principal Rudre Gowda said.

“The institution had no rules on wearing the hijab as such and since no one had used to wear it in class for the past 35 years. The students who came with the request had the support outside forces,” Rudre Gowda said. .