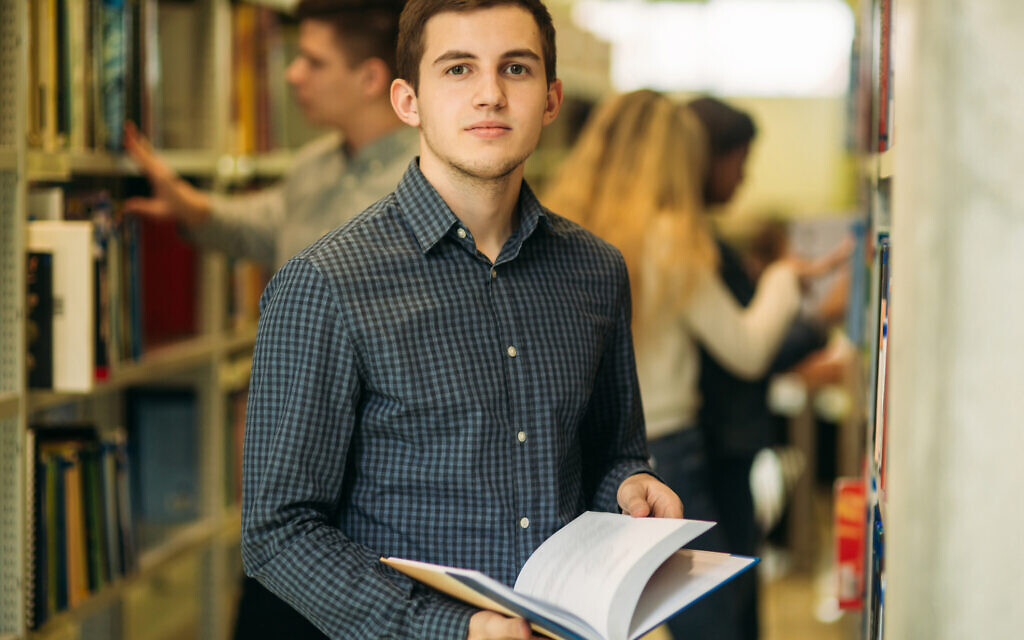 Andrew Cole has experienced two cases of anti-Semitism in recent months. The first incident was not intended for his ears. The second was.

Before recounting the events, Cole, a 20-year-old sophomore at the University of Pittsburgh, said he needed the space. He walked a few yards away, stopped and explained how he had grown up in Ridgewood, New Jersey, a place where he could count the number of Jewish classmates on his hands. High school was only a few years ago, but a lot has changed, he said. There was a pandemic, students were sent home from college, and classes went virtual. Cole missed the lecture theaters where professors talked about American history or urban development. He wanted to be with his friends, like the ones he had met while playing a giant dreidel game on Hanukkah. As the Spring 2020 semester unfolded in a virtual world, Cole realized he was struggling. He finished the term, then took a year off and worked on farms across the country before returning to Oakland this semester for in-person classes.

Something is different now, he said, and maybe that’s why the first incident was so disturbing.

It happened during a gaming session. Cole was not playing, but heard one of the participants say to another player to “Stop being so Jewish.”

Cole believes the comment was made in the context of an exchange. He also doesn’t think it would have been said if his presence had been noticed – and that might be the most hurtful part about it, he said.

â€œI don’t even think he considered me at all, which was worse because I felt like I didn’t even exist,â€ Cole said.

The second incident happened at a party. Cole was talking about music when someone kept asking him questions about Israel and Palestine.

â€œIt was weird,â€ Cole said. “I don’t think it was blatant anti-Semitic rhetoric, but I felt there were underlying anti-Semitic currents.”

The way the questions kept coming in: “I understood that as a Jew, as an American Jew, I kind of needed to have an opinion on Israel,” he said. -he declares.

Cole found this disturbing, he said, because â€œAmerican Jews are not a monolith. We are all entitled to our opinions, whether it is having one opinion or none.

For a significant minority of Jewish students, anti-Semitism is part of university life. In the past year, a third of Jewish students say they have experienced it, according to a survey by Hillel International and the Anti-Defamation League.

Cole said he spent time reflecting on his Jewish identity as well as his reactions to the two incidents he recently experienced on campus. After the person at the party stopped asking him questions about Israel and Palestine, he immediately mentioned the episode to friends. But he kept the episode with the players to himself for days.

â€œIt was so shocking,â€ he said. â€œI didn’t want to talk about it. I felt like I had nowhere to go with it.

His reactions are not surprising. According to the ADL-Hillel investigation, most incidents of anti-Semitism and micro-attacks go unreported.

Delilah Hollander, a 19-year-old freshman at Chatham University, said she had not encountered any overt anti-Semitism on campus, but was treated differently because of her ties to Israel, where she spent a sabbatical year before college.

â€œIt’s something people know about me and something I post on social media,â€ she said.

Hollander believes his online presence initially hindered relationship building on campus. She said her classmates avoided her at the start of the semester and their hesitation was hurtful.

â€œPeople think I am an angry radical who will yell at them for expressing their point of view, which is obviously not something I would do,â€ she said.

As the semester progressed, however, Hollander found spaces where she could interact.

â€œStudents are aware of these issues,â€ she said. â€œIt’s something that we work on and that is recognized, and that tries to be solved by the students and the professors. “

Sam Zukerman, an 18-year-old freshman at Robert Morris University, grew up in O’Hara Township and graduated from Fox Chapel High School before arriving on campus.

Zuckerman said he had not experienced anti-Semitism in Robert Morris.

â€œI believe it’s around and exists, but it’s very minor,â€ he said. “I doubt I will ever see him as a student.”

Zuckerman’s sentiment is consistent with the ADL-Hillel survey results: 71% of students said they felt safe as Jews on campus, while 67% described their campus as welcoming and supportive. to Jewish students.

Gabe Dweck, a sophomore at Carnegie Mellon University, said the statistics are consistent with his experience. He said that even after a group of people painted “Israel is an apartheid state” on the CMU fence in May 2021, he was not too worried, and five months later a separate group of students painted “Stronger than Hate” in the same spot.

Ultimately, the amount of publicity the fence receives is problematic, explained Dweck, 19. â€œIt’s a huge message on campus and it can be delivered by three people. “

CMU has over 7,000 undergraduate students. If a group of 10 people painted a statement on the fence, that is only a small percentage of the student body. Dweck said he understands how students can feel threatened by such incidents, but he has found only “overwhelming support” since arriving on campus following his transfer from the University of Pittsburgh.

â€œI consider myself to be an Orthodox Jew,â€ he said. â€œI stay kosher. I am quite comfortable here.

Dweck noted that his roommate is not Jewish, but that he was so concerned with making Dweck feel comfortable at CMU that their kitchen is now kosher.

â€œI think being on the Pittsburgh campus opened my eyes to accepting people, and that’s not what you expect when you look at what’s going on on other campuses, â€he said.

Sadie Hilf, who is halfway through her final year at Grove City College, is the only Jewish student at the Christian college located 58 miles north of Pittsburgh. Being part of a group, however, did not result in a negative college experience. Hilf has friends on campus, is a cheerleader, and majored in mechanical engineering. She also spent the past summer in the Jewish state as part of Onward Israel and is an active member of Rimon, an international student-led movement seeking to reinvent education in Israel in colleges.

Hilf, 21, described his own college and fellow students as “very pro-Israel.” Grove City regularly organizes trips to Israel, and classmates are constantly asking what they can do to help during times of international unrest.

Hilf, however, recalled a “major” anti-Semitic event. After the Jan.6 attack on the United States Capitol, she attempted to explain to another student how the neo-Nazis were part of the riots in Washington.

Hilf reported the incident to ADL and spoke to Grove City administrators. She said the college had handled the situation “as best they could”.

The biggest problem, said Hilf, is what happens on the less favorable campuses. In many places, students arrive at school and are exposed to aggressive marketing from the Boycott, Divestment and Sanctions movement. Students see these messages and want to make a difference, but at the same time â€œdon’t know the full scope of the organizations in which they are involved. They don’t know that BDS is harmful to Israelis and Palestinians â€.

At the same time, students who wish to support Israel or maintain a public Jewish identity need to master a lot of knowledge and lingo. They are expected to understand the 1967 borders, the Oslo accords and the potential impacts of a “one, two or three state solution”. Yet, on the other hand, someone may just say â€œIsrael is an apartheid stateâ€ and others â€œrally around it,â€ Hilf said.

There has to be an easier way for students to be Jewish and pro-Israel, Hilf said, “otherwise you will be fighting a losing battle for the next 50 years.” PJC

Adam Reinherz can be contacted at [email protected]