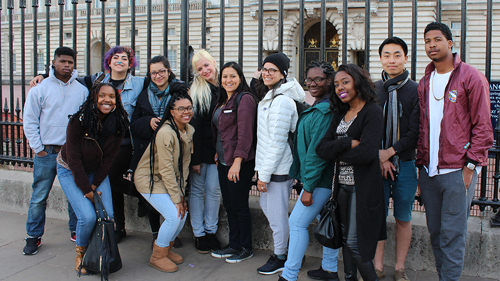 Melvin Cox traces his passion for Africa back to the late 1960s, when he was one of the first students at Merrill College at the new UC Santa Cruz. He was surrounded by professors who were renowned specialists in Africa, including the late John Marcum.

Now, Cox, a documentary filmmaker, is inspiring a new generation of students to engage with the continent by helping organize cultural exchanges through Merrill College. Merrill offers two Global Classrooms – courses developed with support from the Global Engagement division that involve online collaboration between students at UC Santa Cruz and the Co-Operative University of Kenya. Merrill is also hosting a faculty-led study abroad program in Africa in the summer of 2023.

Cox, who teaches world-class “Focus on Africa” ​​and has taken students to Africa, said he was passionate about raising the continent’s profile in the average American’s psyche.

“We want to recreate a constituency for Africa both on the UC Santa Cruz campus and in the home communities of the students who participate,” he said.

“Focus on Africa” ​​is a two-credit course that aims to equip students “with the skills and knowledge necessary to be informed observers and chroniclers of the news on the African continent.”

Cox relied on over 30 years of contacts to set up the course and develop the materials. Online collaboration involving international students has been a boon, he said. He hopes alliances will be formed there that will last the life of the students. “If nothing else, these students will come away with a much better understanding of how our world is truly interconnected,” he said.

Jesus Membrillo Ortiz, a UC Santa Cruz student in ‘Focus on Africa,’ said he learned from Kenyan students in the class that their experiences were similar to those he had when growing up in Mexico . Both regions have widespread poverty and a colonial history that resulted in the oppression of the indigenous population. “Everything they describe is very similar,” he said. “Mexico is a third world country. We understand Africa, it’s the same thing.”

Ortiz said he became interested in Africa because there was a large Afro-Mexican community in Jalisco where he grew up. He would like to help attract more investors to Africa and help bring electricity to those who don’t have it on the continent.

Emma Castleberry, another UC Santa Cruz student in the class, said she gained a different experience of current events from Kenyan students, including learning about the November suicide bombings in the Ugandan capital of Kampala. She said it was also interesting to hear students’ experiences dealing with the COVID-19 pandemic. Kenyan students spoke about the continent’s low immunization rate and how some leaders have spread misinformation about vaccines.

Cox will lead another global “Focus on Africa” ​​classroom this summer which will include an in-depth study of Kenya’s general election scheduled for August 9. Voters will elect a new president, members of the National Assembly and Senate, county governors and members of 47 county assemblies.

The other world class that combines students from UC Santa Cruz and the Co-Operative University of Kenya is a section of Merrill 1, the five-credit Merrill Core course. Merrill College Provost Elizabeth Abrams said students in the course work to create a “field guide to understanding the other”. Students learn to communicate confidently and engage with others across differences.

Mercy Jebichii Kiprotich, a student from Kenya, said she appreciated the opportunity to improve her critical thinking skills in addition to her synthesis skills. She is happy “to interact with my fellow students from outside my continent and to share our ideas together”.

Abrams, Cox and UC Santa Cruz theater faculty member Patty Gallagher had planned to travel to Kenya late last year, but the plan was canceled due to the Omicron Variant.

Plans are still moving forward to send UC Santa Cruz students and faculty to Kenya in the summer of 2023 for a study abroad program.

Cox had a successful experience taking 11 students to South Africa, Tanzania and England in 2015. Olimpia Maderit Blanco-Zuniga, one of the students on the trip, said it was a memorable trip, which included a unsuccessful attempt to interview delegates attending the World Economic Forum on Africa, and a chance to interview doctors about their work on malaria in Tanzania. Blanco-Zuniga remains in contact with Cox and is happy that he continues to bond with UC Santa Cruz and Africa.

“It was amazing to see Melvin’s dream come true,” she said.

George Sabo, director of global initiatives for UC Santa Cruz’s Global Engagement division, said the Africa-focused Global Classroom courses are part of a larger initiative to provide students with the ability to connect virtually. with students from all over the world.