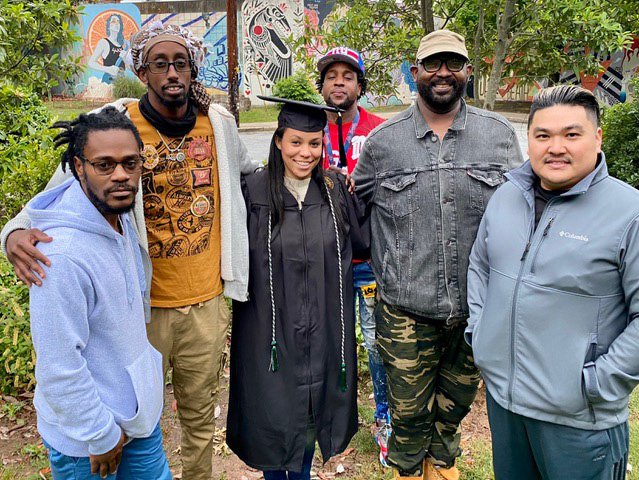 OXFORD, Georgia. – Two former Oxford College students recently reunited with some of the former prisoners they helped teach as part of a special program offering college courses to inmates at a Gwinnett County State Prison.

Katie Pleiss of Dunwoody and Ally Render of Johns Creek were the students who volunteered for a college prison program called Common Good Atlanta while at Oxford College of Emory University in 2019.

They participated in the program at Philips State Prison, a medium security prison near Buford.

Pleiss recently graduated from Emory University and will be entering Harvard Law School in August.

She said she was originally inspired to become a lawyer after reading a book called “Just Mercy” by a lawyer who worked with disadvantaged clients.

She said she wanted to work with the program after taking lessons from Sarah Higinbotham, an English teacher at Oxford College.

Higinbotham founded Common Good Atlanta in 2008 after saying she felt called upon to volunteer to teach in a prison in response to her uncle’s incarceration, according to the association’s information.

The program has grown to include more than 60 faculty members teaching courses in four prisons, including Phillips, Metro Reentry Facility, Whitworth Women’s Facility, and Burruss Correctional.

Pleiss said she oversees the inmates’ monthly writing projects and is able to build one-on-one relationships with them.

â€œBefore COVID, it was a big part of my college experience,â€ she said.

One thing she had to overcome was her apprehension of going through the security measures required to enter a state prison.

â€œWalking into an environment where you are yelled at, I remember the first two times I felt like a criminal,â€ Pleiss said. â€œYou can easily get into trouble if you’re not wearing the right badge. ”

She taught math to inmates in a course similar to those required to earn a GED, Render said.

Participation in the program has shown her that there are areas that help “restore the dignity and humanity” of prisoners, she said.

â€œI learned that education was a way for them to reconnect with society,â€ she said. “They kind of changed … my view of education.”

A press release detailed their meeting in an Atlanta park with former Prison Program alumni to celebrate the recent graduation of Oxford alumni at Emory University.

Pleiss told six former inmates who participated in the program that “You changed everything for me.”

â€œFrom writing my honors thesis on the need for human dignity in prison to leading my path to law school, you have inspired me,â€ she said.

A former inmate, identified only as Quang, who went to jail at the age of 16 and served 20 years, brought his young son to the park.

As he held his son in his arms, he told the graduates: â€œYou didn’t just help us while we were in prison, you also transformed the next generation – our children -â€.

Another ex-convict named Dominique told Emory students that “you have no idea what a difference you have made”.

â€œYou showed us that we were your peers, even when we were barely treated like human beings in prison. You have convinced us that we have something to give to the world, and now we are ready to give it. Thank you.”

Principals oppose disaffiliation of 40 colleges from the University of Punjab: the Tribune India