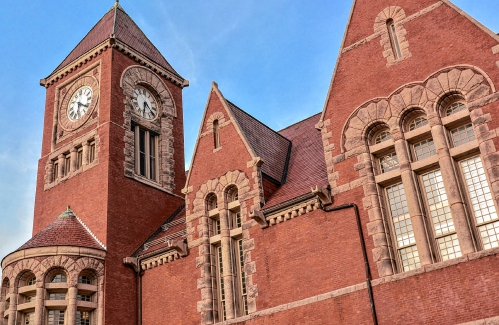 AMHERST — A new 68-unit, 230-bed apartment building on the site of a former sorority house on Olympia Drive, for rent exclusively to students, is making its way through the city’s permitting process.

For the five-story project at 47 Olympia Drive, proposed by Amherst developer Archipelago Investments, LLC, planners will focus during Wednesday’s initial hearing on whether there will be enough parking near.

Like the nearby Olympia Place which opened in fall 2016 at 57 Olympia Drive as a 75-unit, 236-bed apartment building, there is no on-site parking.

But Kyle Wilson, an Archipelago manager, said there were 625 University of Massachusetts-controlled parking spaces within 800 feet of the property, and over Olympia Place’s six years of operation , there were no problems for renters with their vehicles.

“Our feeling is that we had no problems with parking here,” Wilson said.

Still, Planning Council member Janet McGowan said a traffic report would help planners understand how many vehicles tenants might have, adding that there is growing pressure on parking in the city.

President Douglas Marshall encouraged Archipelago to add a drop-off area in front of the building for visitors.

Wilson submitted plans that show two five-story buildings, connected at one end. Between the buildings is a landscaped courtyard that would be permitted for gatherings and other uses.

“Very impressive, very creative,” is how Andrew MacDougall, board member, described the project and the connection between the buildings.

Planning Board member Johanna Neumann, who said she considered the building to be elegant and beautiful, said she was delighted that solar power was on the south-facing roofs, but wondered if others Fossil fuel sources beyond electricity would be needed at the site, especially for heating water. .

Wilson said other than the on-site generator, which would be powered by some type of fossil fuel, likely propane, the idea is that electricity would be the only other power source needed.

“Our hope is that everything else, heating, air conditioning, hot water, will be all electric when we open this building,” Wilson said.

Wilson said Archipelago is able to do this with all-electric CO2-based heat pumps for domestic hot water.

Solar makes a small dent in energy needs, he said, but there is not enough roof space to accommodate all the energy. Wilson said the plan is to buy green power from Eversource to meet demand.

McGowan said she would like more details about on-site management and whether it’s necessary to reduce issues often associated with student rentals, including parties.

The hearing for the project will continue on September 21 at 6:35 p.m., when the city engineer, fire department and Conservation Commission are due to provide reports to the Planning Board.

Scott Merzbach can be contacted at [email protected]