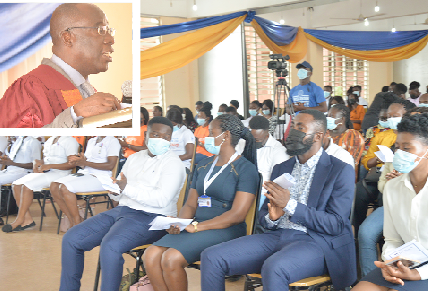 The president of Wisconsin International University College, Ghana, Professor Obeng Mireku, called on the government to intervene in what he called “exorbitant” affiliation fees charged by public universities to which private university colleges are affiliated.

He said that under the current arrangement, private universities are required to pay an annual service fee of GH Â¢ 135 per student admitted to the affiliated public university per semester, a fee he characterized as “Heavy”.

In an interview with the Daily Graphic during the university’s 18th matriculation ceremony on its Accra campus last Saturday, Professor Mireku said the situation largely explained the high tuition fees charged by private universities .

â€œAlmost all private universities are screaming that their affiliate fees are too exorbitant. Each private university must pay an annual service fee of 135 GH Â¢ cedis per admitted student per semester. It is very heavy.

â€œWe are inclined to pass it on to students, even though we know it overloads them. If all of these things are to be removed, it will lower tuition fees and make private universities able to admit more students, â€added Professor Mireku.

Professor Mireku said a number of private universities were struggling due to the impact of the pandemic on their finances and would need government support to maintain their operations.

He called on the government to come to the aid of private universities by giving them additional tax breaks, among other support systems, to enable them to continue to provide quality education to citizens.

â€œThere is a litany of challenges affecting private universities and that would require government support.

The government must help private universities to continue to provide quality education, as the state alone has proved unable to provide higher education in a developing country like Ghana, â€he said. .

The enrollment oath was administered to 2,719 students who were admitted to various courses.

Addressing the ceremony, Prof Mireku urged the students to work hard, show integrity, and take all available opportunities for their personal and collective development.

â€œI want to remind you that in Wisconsin, class attendance is not negotiable. As stated in your student manual, if you were absent from class for a period of three weeks of work, you would be forced to withdraw from university or repeat the course, â€he told the students. registered.