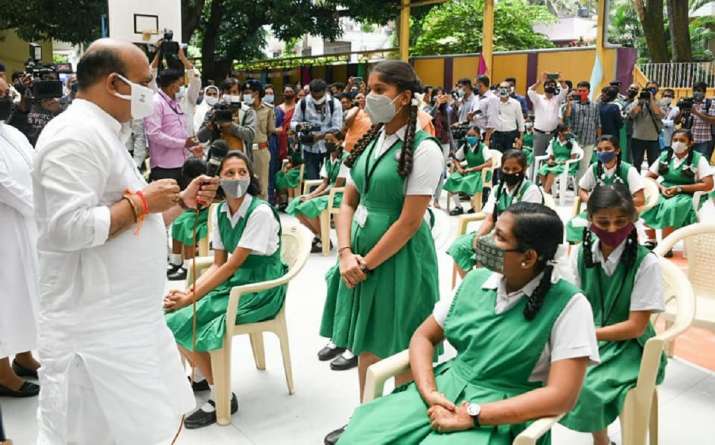 Students crowd into high schools and junior colleges in Karnataka

High schools and junior colleges in Karnataka welcomed students to offline classes on Monday after 18 months. Large numbers of students have flocked to campuses responding positively to government appeals. Chief Minister Basavaraj Bommai and Minister of Primary and Secondary Education BC Nagesh had urged parents to send their children to school without fear.

Principals and teachers stood at the entrance to greet students with roses. Some schools welcomed their students by beating drums and blowing bugles. Some welcomed the students by distributing masks and making “aarti” (a Hindu tradition of waving lamps to ward off evil spirits).

Chief Minister Bommai said students are attending class with all joy and happiness and thanking the government for the decision to reopen schools. It had been over a year since they had taken a course. Through various programs, teachers have tried to keep in touch with students all these days. “A decision will be made after discussion with experts on opening primary schools in the state,” he said.

Minister Nagesh allowed children of migrants and others who were unable to travel to their respective schools to attend classes at nearby schools. “Parents sent their wards with all happiness,” he said.

The 9th, 10th and pre-college grades of 16,550 high schools, 5,492 PU middle schools were opened in 26 districts of the state. Classes will be held between 10 a.m. and 1:30 p.m. Schools and junior colleges remained closed in Dakshina Kannada, Udupi, Chikmagalur and Kodagu districts as more Covid cases were reported from here. Classes should start from August 30 in these neighborhoods. Hassan district authorities have decided to open pre-university colleges in the district from Monday and to open high schools next week.

Minister BC Nagesh explained that schools have been asked to ensure Covid appropriate behavior. “Except for schools, all activities of society have started. Children studying in 9, 10 and PU are not among those who would stay at home. They were involved in various activities and chores,” said he explained.

“I visited a few schools on Sunday in Bangalore. Schools have made proper arrangements limiting the number of students in a classroom to 20 to 25. Proper hygienic toilets, availability of sanitizers in schools are ensured. children will also be checked and monitored for symptoms. I am confident that schools will function well in the days to come,” he said.

The government would decide later on the opening of primary schools. Some schools have an enrollment of 300 to 1,000 students. “We will see how to proceed after monitoring the conduct of high schools,” he said. He pointed out that currently the positivity rate in the state is around 1% and if there is an increase, schools will be closed. “But I don’t think that day will come,” Nagesh noted.

Harshini, a teacher, explained that schools would come alive if only children attended classes. “The joy is the same that parents feel in the presence of their child at home,” she said. Chief Minister Bommai on Monday visited the Government Junior College and High School and Nirmalarani Assisted School in Malleshwaram with Minister of Education Nagesh and Minister of Higher Education and IT, BT Dr CN Ashwath Narayan. He interacted with the students and warned them about Covid infection.

Bommai called on all ministers to visit schools in their districts and inspire confidence in parents and students. He also asked them to monitor the precautionary measures taken by school and college management.

Admission process for University Colleges in Rajasthan will start tomorrow