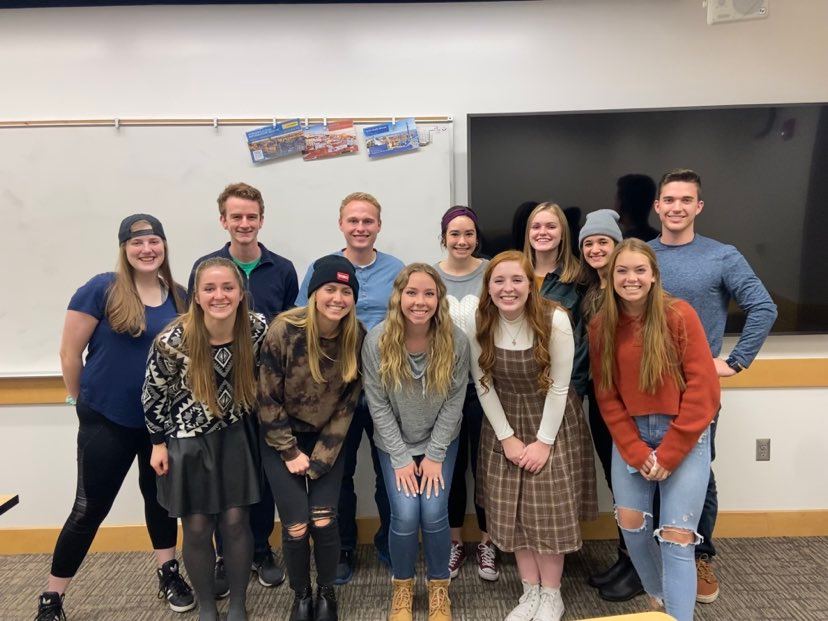 Picture this: You walk into your first day of BYU class expecting to find a white-haired professor with elbow pads at the whiteboard. Instead, you see a classmate teaching on the podium. Their backpack is on the floor at their feet so they are ready to run to the next class they are in after they finish teaching the lesson.

This scene happens more frequently than you might think, not just at BYU, but across the country. Graduate students as well as undergraduate students are increasingly being hired to fill positions previously held by professors in universities.

Is there a cost?

Some may wonder if students are disadvantaged by being taught by students rather than full-time faculty. A 2019 study said that students taught by less educated instructors also did well in their respective courses. This report compared data from teachers of various academic grades, including Ph.D. students, assistant professors, associates and professors.

“We find no significant differences between instructors of different academic rates in how they affect student grades, affect subsequent related course grades, or affect student earnings or job satisfaction after graduation” , says the report.

Another study conducted at public universities in Ohio in 2016 highlighted the benefits recorded for student instructors and those under their tutelage. Graduate students who teach are likely to graduate faster and be more employable. Their students, the study shows, are 10% more likely to major in a subject if the first course they took in that subject was taught by a graduate student.

“Anyone who has taught knows that it helps you crystallize your understanding and connect to your own research questions,” study co-author Eric S. Taylor told Inside Higher Ed. feedback loop.”

This feedback loop has been clear in Dani Hallows’ experience teaching college courses. Hallows is in her second year of graduate school at BYU, having completed her undergraduate degree here from 2016-2020. She began teaching COMMS 308: Research Methods for Journalism in fall 2021 and is teaching again the course this semester.

Because she takes classes while teaching, she feels closer to the student experience and she says it helps her be closer and more vulnerable with her students. “I felt like there was sometimes a disconnect between the older teachers and the younger students. Here, I constantly put myself in their shoes instead of trying to be the teacher,” she said.

Hallows said passing on the knowledge she learned in school made her BYU experience more impactful.

“All of a sudden, I was going to serve in the same place I walked in to learn, which was really cool,” she said, referring to BYU’s motto. She loved applying what she learned in college by sharing it with other students.

“It makes all good experiences that much stronger,” Hallows said. “To say that teaching is like the icing on the cake doesn’t even begin to cover it.”

Hallows took a teaching course as one of her graduate choices because she was “semi-interested” in having the opportunity to teach. This class was taught by Jessica Zurcher and gave Hallows the chance to learn not only about college education, but also parenting skills and religious education. He has been asked to teach COMMS 308 in mid-August 2021.

Teaching the research class expanded Hallows’ idea of ​​what she can do with her education. She said it combines all the skills she loves the most and she would be willing to teach again in the future, although she has no concrete plan to do so after she gets her degree. diploma.

“It definitely broadened my horizons,” Hallows said. “I feel like I’m more open than before. I was only in journalism, but now I can see so many connections.

The Pedagogical Major in Action

While Hallows never expected to teach in college, BYU student Rachel Koncurat always knew that teaching would be part of her education. It just happened sooner than she expected.

Koncurat began as a theater education major. She felt inspired to switch to a Spanish education after serving a Spanish-speaking mission for The Church of Jesus Christ of Latter-day Saints in Kennewick, Washington.

“I felt like it had a huge impact on who I am as a person and how I see the world,” Koncurat said of her assignment. “That’s why I wanted to continue with the Spanish.”

A former Koncurat teacher asked him to teach SPAN 101: Fundamental Spanish 1. It was August 2021, just a few weeks before the start of the semester. Many graduate and undergraduate students teach BYU language courses, but most are chosen later in the program. Koncurat is expected to graduate in April 2023, but the professor believed in Koncurat’s qualifications and asked him to teach.

All Spanish education majors must complete a semester of teaching at local schools before graduation, so this work does not count for internship credit. Still, as preparatory experience and salaried employment, Koncurat said she felt grateful for the opportunity.

“How many people can say they taught at BYU during their undergrad?” she says. Koncurat said it was “surreal” to be a teacher here. “I think it gives me a lot more opportunities to make an impact.”

Koncurat thinks the students she had in her class last semester were meant to be part of her life. Some students have come to her with struggles, class-related or not, such as debating whether to serve a Church mission. One such student received a missionary call to Peru this semester and texted Koncurat to let her know.

“I don’t think there are any coincidences: I absolutely believe I was supposed to be their teacher,” Koncurat said. “Learning to teach makes me feel like I really have a purpose here, that I’m really here for a reason.

Teaching is also a big part of Brandon Keck’s goal. Keck is an exercise and science student in his fifth year at BYU.

This winter marks the second semester that Keck is teaching DANCE 180, a social dance class, and DANCE 184, an introduction to ballroom dancing. Teaching in the fall of 2021 fulfilled the internship requirements for Keck. This semester, however, he is on paid staff.

Like Koncurat, teaching has always been Keck’s ultimate goal. Upon graduation, he will be a professional ballroom dancer and teacher. He has 15 years of ballroom training and is excited to work in a studio in the future.

Keck said teaching at BYU has been a “great additional experience” to his college experience. He said he likes the job because he is qualified for it and he is fulfilled by it. He also appreciates the ease of going directly from work to class and back again.

“Teaching has helped me appreciate the many different people who attend BYU and learn to see from other people’s perspectives,” Keck said. He said he learned to be less of a perfectionist in his expectations by working with different students, focusing more on their development journey as dancers.

Teaching students is not without challenges. Hallows said she felt like she was “walking a tightrope” teaching her first class last semester. She said she knew how much her students struggled because she had been in their shoes, but she also knew she had to push them to help them become the best they could be.

The class consumed much of Hallows life. She said that even when she had other things to do in her education and family life, all she could think about was planning for her students.

“I learned so much,” Hallows said of her time as a teacher. “I felt like it was the most successful thing I’ve ever done in my life.”

Another difficult part of teaching was the transition to teaching a second semester. Hallows loved everyone so much in her first semester and was so happy with how things were going in this class that she feared next time wouldn’t go so well.

“I think it’s always a learning process because every class is so different,” Hallows said. “You have to think individually about many students in your class, and so it’s going to change from semester to semester.”

However, she is happy with the way things have gone so far. “They’re different, but they’re great in a different way,” she said.

One tool that helped Koncurat adjust to teaching was having a supervisor she met with once a week for a one-credit teaching course. Taking this class at the same time as she was teaching a Spanish class allowed her to ask questions and receive feedback during her teaching process.

Koncurat was surprised to be paid on a salary instead of being paid hourly like most college jobs. She said this different approach has helped her be more intentional about how she spends her time, ensuring she focuses on the resources that will help her students the most.

More teaching opportunities are available than people realize. Koncurat said accepting a job as a college Spanish teacher was daunting, but it helped her realize she was more qualified than she thought to teach a wide range of students.

She advises students to embrace the opportunities that come their way, even if they are intimidated by the prospects.

“Don’t worry if you’re not enough, because I think we’re growing to respond to the opportunities that are given to us. And over time you will understand that,” Koncurat said. “It’s not going to be exactly what you imagined. But that doesn’t mean you can’t do it.

Georgia students with criminal records campaign to get past the box